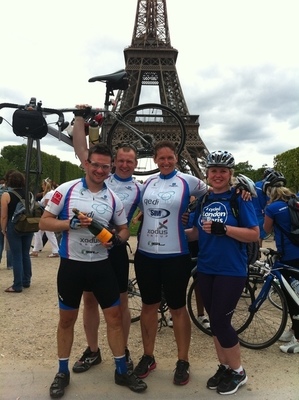 Andrew Doherty, Project Services Engineer, and three friends committed to raise a minimum of £8,000 between them for the British Heart Foundation, Breakthrough Breast Cancer and the Archie Foundation, which helps sick children throughout Grampian, Orkney and Shetland. In order to do this, they set themselves the challenge of cycling from London to Paris in four days along the following route:

Day 1: London to Calais – 95 Miles
The challenge begins bright and early from Blackheath, heading south en route to the coast.

Day 3: Abbeville to Beauvais – 65 Miles
The route that morning followed the River Somme out of Abbeville.

Day 4: Beauvais to Paris – 60 Miles
The team’s final day of cycling and the big push to Paris, their final destination.

Andrew describes the friends’ road to success through stamina, commitment and unyielding dedication:

My team and I were all novices to cycling but were willing to commit ourselves for the 6 months of training leading to the challenge and then undertaking 4 days of intensive cycling to help make a difference to these worthy charities. The following is our story:

The excitement and optimism of a beautiful cycle through south east England was short-lived as we endured a crash in the first hour and then two punctures before lunch. On the weather front it started out beautiful with a few challenging hills, but unfortunately the weather proved to be volatile for the rest of the day and made for a soggy lunch stop. With lunch behind us, the halfway mark passed and the sun once again making an appearance, we felt great as we approached our final water stop en route to the home straight. Our joy was short-lived when our team missed a signpost and took the scenic and hilly route to Dover resulting in a 10-mile diversion, it later turned out that the signposts were sabotaged and as we were in the lead pack we were the first of many to get lost. With the first day over and just a ferry crossing and a few more miles to go we thought we could relax but ferry delays and general chaos at Calais meant we didn’t get to our hotel until 11:15pm and after a 6am start it turned out to be a very long day

Day 2 and a very cold and VERY windy start for about the first 40 miles along with some major climbs. From the start of day 2 through to lunch the weather was very challenging and rather cold, which saw spirits drop quite a bit. Thankfully the bad weather finally dispersed and the sun broke out, so it was waterproofs and longs off for what was a thoroughly enjoyable last 35-odd miles, arriving at our hotel to find the celebration beers in full swing. We were now on 170 miles of a 295-mile journey and past the halfway mark, which really lifted spirits and gave a renewed optimism amongst the team.

Day 3 saw a civilised start to the day with an 8.30 start, which allowed for long lie-ins. With beautiful weather from the off, it was set to be a thoroughly enjoyable day. However 20 minutes after lunch disaster struck with a puncture...drum. A quick change which would impress the Red Bull F1 team and we were off, that is until the next town. When doing the puncture repair we had been passed by two fellow riders that we’d got to know quite well, so much so that when they missed a turning Iain volunteered to chase them down, a whole mile and half (which is huge on a bike trying to chase a moving target) as the riders were flying after lunch... Anyway, good deed done for the day and all three arrived back to join the waiting team, but as we set off ANOTHER puncture. With one spare tube left, no more air cartridges and 13 miles to the next stop, we couldn't rely on hand pumps and had to call the support bus in, all in all losing about an hour which was terrible as we were faring well at the front. By this point the cyclists who were a little more challenged had passed us so there was some work to do. After a last water stop and plenty of jelly beans it was a final run in to Bauvais and some close shaves on dual carriageways and manic traffic to finally arrive at our hotel with only 60 miles to go.

After having some good downtime the night before the team awoke on day 4 to beautiful weather and what promised to be the easiest day. There was a water stop at 22 miles, lunch 40 miles and the holding point at 48 miles before the final stretch to Paris and the Eiffel Tower. However, that was a long way off at 8.30am and the last day started with a very long and very steep climb, thankfully after panting and puffing and dragging ourselves up there the rest of the journey to the water stop had only small inclines, but even small ones were tough after all the miles we'd done. The water stop was by in no time and fuelled by jelly beans we were off to lunch and the excitement started to build. After a quick photo stop we made our way to lunch through large towns with heavy traffic that was getting worse the closer we got to Paris. The main obstacle by this point was making green lights in time! Lunch was at a beautiful location by the Seine and the food was piled high before we took off to the holding point, by which point we were on the outskirts of Paris riding along the Seine, and with the weather getting hotter with every mile. We entered our holding in preparation for the convoy which was an impressive sight. I think it's safe to say none of the team will ever forget those last few miles, we had support vehicles front and back guiding and protecting us all the way to our final destination and 140 crazy cyclists whooping and hollering with music blaring and horns blasting from the support vehicles made for an amazing sight. Riding past Arc de Triomphe, all the traffic came to a standstill, which should be impossible but we were an impressive force. We continued winding through Paris until the Eiffel Tower started to peek at us from behind the beautiful Parisian buildings... a lump of steel has never looked so beautiful. We were now entering tourist central and the applause and cheers we got were amazing, especially as they must have thought we were all mad and probably never knew what we had just endured. We made our final approach to the Eiffel tower and Avenue Joseph Bouvard, where it was a task keeping your concentration and looking out for friends and family. The Stonehaven London to Paris team was met by family and Veuve Clicquot and just like that we were done, literally! The emotions were high, a mixture of relief, joy and sadness.

Six months of discipline and hard work had all paid off and we had all completed every single 300ish miles, climbing over 12,000 feet in total. The overall total is in excess of £10,000, an amazing amount with great support coming from OSL Consulting as one of our main sponsors.