The BBL (Bacton-Bagzand line) plant, operating on the Shell Bacton Gas Terminal, lands sales specification gas from a compression station in Anna Paulowna in the Netherlands.

BBL Pipeline capacity is sold to shippers on the open market, with trades setting the amount of gas transfer required within the next Gas Day (Nomination). To ensure that the Nomination is acceptable based upon plant capacity, an End-of-Day (EOD) system sits within the control logic and accepts or rejects nominations.

However, with this scheme, streams are overused and erroneous rejections of nominations are occurring, with significant commercial impact. In addition, under high gas flow-low heat duty scenarios, the current Burner Management System is cycling the heater burners, leading to thermal cycling and resulting in thermal fatigue of the burner tubes.

Shell Bacton identified that as part of the investigations into the issues with the control scheme, the Operating Envelope of the plant required to be evaluated and defined to allow optimisation of plant performance.

A first phase of this work involved the establishment of different operating scenarios (for a range of total plant flow, arrival temperature and plant differential pressure), taking into account the operational limits of the system. In order to generate this Operating Envelope a process model of the plant was developed. The methodology of process modelling included the compilation of the data available and operational conditions, the assumptions that were taken into account, and the construction and simulation of the system using UniSim®.

A second phase of work was conducted to complete the operating envelope of the plant (Plant Pressure Drop vs. Plant Total Gas Flowrate) for the full range of landing temperatures, gas landing and export pressure, gas total plant flowrate and number of heaters in operation considered in the first phase of this work.

In addition, further calculations were performed in order to determine the Pipeline Pressure Profile of the system from Anna Paulowna Compression Station. The results were added to the Plant Operating Envelope in order to show the limits of system due to the realistic values of gas arrival pressure at Bacton and National Transmission System requirements.

It was a requirement of the client to represent all results obtained into one chart that considers all changes evaluated in the system.  This would require a 3D representation and so a different method would have to be found.  However, it was not possible to prepare 3D representations using Microsoft Excel® in the manner required.

Therefore, it was necessary to obtain a solution that met the client’s requirements in another way. Two solutions were developed:

As the client requested the results using Microsoft Excel®, the use of Visual Basic for Applications (VBA) was used as the solution.

These tools helped to create a simplified search tool for the wide range of results and identify the desired mode of plant operation. 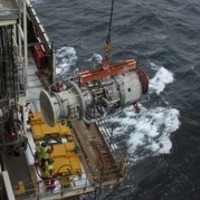