OSL were requested to carry out process design activities relating to a proposal to retrofit an LNG unloading contingency system to an existing facility at GNL Quintero in Chile.

The existing facility utilises five hard-piped arms for offloading LNG (Liquefied Natural Gas) to shore and returning vapour to the LNGC (LNG Carrier). However, a scenario was identified by the operator whereby the LNG arms could become damaged due to an earthquake and would be unable to transfer LNG. Under this situation the requirement to transfer LNG still existed in order to maintain a gas supply to the local network and therefore a back-up system was required.

The proposed solution was to modify the existing system such that LNG could be unloaded from the LNGC, albeit at a reduced rate, via a hose based system. There is a wealth of experience of using this hose method in existing Ship-to-Ship operations worldwide; however, currently it is not used in ship-to-shore operations.

The design was developed to ensure that minimal modifications to the existing equipment needed to be made. The following items were then made available to the client:

The solution had to consider that it had to tie into the existing facility, and was not part of the original design.  The space was limited for modifications and construction.  The system had to ensure that safety levels were still maintained.

The design used standard fittings configured to fit the space available, the fittings were limited in size so that they could be lifted with the size of crane able to access the jetty area.

This produced a simple, easily constructed and cost effective solution.

This design and assessment exercise resulted in the development of a feasible and safe solution in the event that the existing hard arm system became unusable in the event of an earthquake.

The client now has the insurance of a safe and working system that will allow LNG to continue to be offloaded without disruption in the event of an earthquake.  Their business is therefore more secure without major modifications and cost. 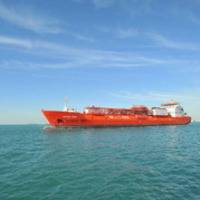