An opportunity for IMS arose when the Bahrain national oil company Bapco required a small land-based LNG storage facility sited on reclaimed land. The IMS philosophy to minimise land storage was to locate a storage ship offshore and then LNG could then be shuttled between the two.

OSL designed the terminal so that IMS were able to present a technical solution together with a commercial proposal for the terminal build and operation.

OSL was involved in the specification of the land reclamation, the design of site facilities and buildings, as well as utilities such as power generation, cooling water and fire water. Safety aspects were an important part of the design, including ensuring containment and spillage segregation systems were included.

Process simulation models were created throughout the design. Also 3D computer graphic models were prepared allowing the visualisation of the proposed terminal on the reclaimed land.

The system capacity was designed in such a way so as to allow for easy expansion without loss of production.  This included a jetty design which could be easily converted to berth much larger ships with the addition of a single central loading arm structure.  The storage system was designed to shorten the construction time of the facility by using the same tank design as those in the ship.  This allowed the tanks to be fabricated offsite in parallel to the civils works.  This was much quicker than the more traditional flat bottomed type.  The tank design was modular and much cheaper giving an advantage on flexibility and overall capex. 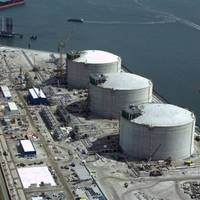