Colbún S.A. and AES Gener required the supply and operation of an offshore LNG Regasification terminal at Oxiquim Port, Quintero Bay, Chile. The terminal was to utilise an FSRU to store LNG and export Natural Gas via a pipeline to the local network when required.

1) Utilise a single-berth jetty to moor the LNGC against the FSRU.  Transfer operations shall then be conducted in a double-banked arrangement.

2) Provide a double-berthed jetty against which both the FSRU and LNGC can be moored and LNG transferred across using unloading arms.

Two options were put forward for further consideration: the Double-Jetty option and the Ship-to-Ship option. Some key elements of the design were common to both options:

The output of the study was to make a comparison between the two options using a selection matrix of a number of ranking criteria.  These were Technical Suitability, safety risk, cost and schedule.

Key features of the Ship-to-Ship option:

Key features of the Double-Jetty option:

Conventional comparison techniques were used to make an assessment of the two options against each other and to make sure the common elements were identified.  The use of tried and tested ship to ship transfer techniques with hoses in a jetty location rather than open sea provided the opportunity for a much more cost effective solution.

This design and assessment exercise resulted in the development of a feasible and safe solution for the modification of the existing LNG unloading system to allow the use of hoses to transfer LNG, in the event that the existing hard arm system became unusable in the event of an earthquake. 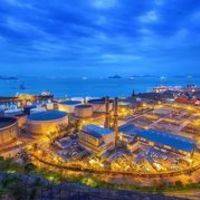