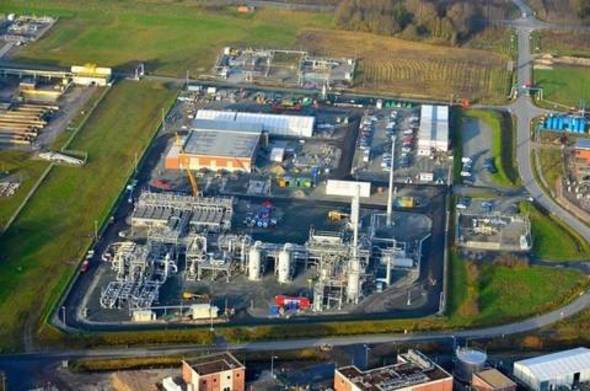 OSL are at the forefront of a truly innovative project development. EKB is a joint venture company formed between BP, Dong Energy and Gazprom Germania, and their first project is designed to reap rewards from the opening up of the European gas trading market via the transportation of natural gas to and from the Dutch and German transmission systems.

The storage facility is located at Etzel, 30km south of Wilhelmshaven in North West Germany and connected via a 60km pipeline to the Dutch gas transmission system, giving it access to one of the most important natural gas trading hubs in Europe.

Underground salt caverns have been formed by drilling deep into the ground and pumping in sea water to dissolve salt deposits in a controlled fashion, a process known as leaching. This creates a cavern full of brine with a volume of around 700,000 cubic metres. Natural gas is then pumped into the cavern at high pressure, displacing the brine into the North Sea, leaving a cavern full of gas ready for selling when the price is right. This then creates space for more gas to be stored and traded.

EKB engaged OSL in 2008 (via their links with BP) to place a team into Copenhagen to supervise the Front End Engineering Design (FEED) stage of the project. As the project developed, OSL were asked to modify this FEED at their Hull headquarters on Freightliner Road, leading to a doubling in size of their multidisciplined team of engineers. The team then split into two, with the commercial management team based in OSL’s Aberdeen office and a technical management team moving out to Düsseldorf for two years to oversee the Detailed Engineering stage of the project. In late 2010 the technical team then moved to the Etzel site to oversee the construction and commissioning phase of the project, and a new design team was formed in Aberdeen to complete some of the detailed engineering work. In particular, OSL have helped EKB to change the facility from an unmanned setup to an expanding fully staffed operation.

With the plant recently entering commercial operation, OSL are now providing a full-discipline engineering support service to EKB from their offices in Hull, Aberdeen and on site. A number of technical enhancements are being developed through OSL’s management of change system, from conceptual design through to site implementation.

“Over the last five years we have provided a variety of support services to EKB, covering both the technical and commercial aspects of managing the project. This has provided OSL with far more in-depth involvement in the project than we originally envisaged and allowed us to demonstrate our skills in finding the right solutions for our client at various key stages.”

Aside from the uniqueness of this project, some of the equipment selected perfectly reflects OSL’s skills at innovative problem solving. The gas compressors are hermetically sealed, with gas-cooled units fitted with magnetic bearings. This avoids the requirement for the complex oil and seal systems generally found with these machines, together with all the attendant maintenance these systems require. The use of such a machines (EKB have purchased three of them) is a first for BP and it is hoped to be the pilot for many other applications, including subsea.

The use of magnetically-suspended variable speed 8MW electric motors to drive these gas compressors means that the plant can start up from cold in just a few minutes and can switch between exporting and importing gas very quickly, thus maximising the ability of the gas traders to buy and sell in response to market variations.

“High-speed, oil-free induction motors have proved very interesting and highly effective,” explained Nick. “It’s all about clever thinking, and as a result we have other companies watching us and eagerly taking note. Uniqueness and consistency have been major factors from the start, which certainly gets people’s attention.”

With BP producing over eight billion cubic feet of natural gas every day across their organisation, OSL are proud to be working with them and their partners on such an exciting and valuable addition to their gas storage activity, with the prominent EKB Project being an excellent addition to their already impressive portfolio.