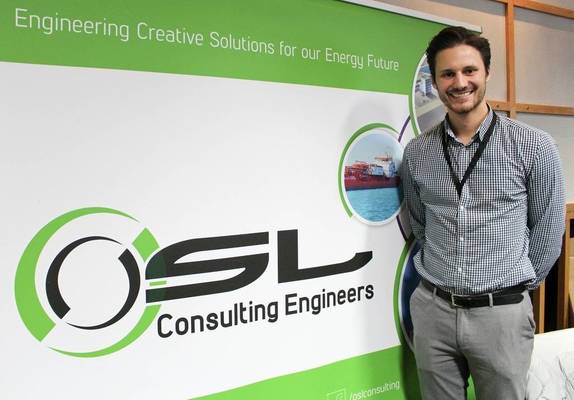 It must seem like only five minutes ago that Oly McIntosh was saying goodbye to The University of Hull, after graduating with a First in Mechanical Engineering back in July. Nevertheless, he returned to the campus this month to give final year students some advice on careers, specifically the opportunities at OSL, where he has just landed his first alumnus job as a Graduate Mechanical Engineer. In this interview, we look into Oly’s career path to see how he got where he is today.

As soon as a student enrols at university, lecturers and careers advisors begin encouraging them to think about life after graduation. Whilst many may prefer to put the thought to the back of their minds until a later date, Oly took the challenge face-on, determined to land his dream career.

“I did a lot of independent research into the industry and that’s when I discovered OSL Consulting,” explains Oly. “I made a point to attend all of the events I could, where I would have a chat and catch up with Sarah Taylor, the Resourcing Manager."

Meanwhile, Sarah, who was also at November’s Hull Engineering Fair, gave this advice to a student visiting our stall: “It’s important to keep in touch with me. Companies can receive so many CVs from graduates, so make sure to maintain communications and get your name out there.”

Networking events, careers fairs and guest lectures are a great way to get to know the companies that are looking to hire, but experience is often highly sought after by recruiters: “I did an internship with a design consultancy agency in York during my second year,” explains Oly. “That was also when I first got in contact with OSL, which got the ball rolling.”

Oly has had a busy four years to say the least, receiving a little surprise during his degree: “I actually became a father in my second year, which was incredible. Time management suddenly became even more crucial to developing my career.

When asked how a student can take their initial steps toward an engineering role, Oly gives this advice: “I first took an apprenticeship in plumbing and gas engineering. Attending university was a natural progression from there, as the apprenticeship helped me to understand the industry landscape and focus on the appropriate knowledge and skills required.”

After working hard on his degree, Oly found out that he had secured a Graduate Mechanical Engineering role at OSL in January 2016, starting the job in September: “It’s been an amazing few months, I have already developed my expertise so much since joining the team, especially through close mentoring.”

In terms of aspiring engineers looking for a graduate job, Oly recommends the following actions: “Sarah liked that I kept in touch and shared my aspirations. I was doing something different and stood out from the rest – all upcoming graduates need to demonstrate true commitment to their objectives.”

As for the attraction to a career in engineering, Oly is an excellent spokesperson: “It’s so interesting and exciting, as we’ve got multiple projects going on all over the world. Perhaps most importantly, I haven’t been pigeon-holed into one job: it’s different every day, I’m working with enthusiastic specialists on new things and it never gets boring.”

Proud of his University of Hull background, Oly urges students to seek as much support as they can: “The best part of studying here was the people in my department. I have some really good professors to thank, and I’m still in touch with many of them. They’re passionate about helping people to achieve their employment goals, which makes all the difference.”

You can connect with Oly on LinkedIn and keep up to date with developments at OSL on our company page.